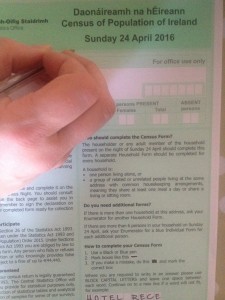 Ok today is the day to fill out your census forms. It’s a bit of a nuisance but it’s a necessary evil if governments (whenever we get one) want to plan ahead. The 2016 version is much more PC than those of the early part of the century. Just taking the 1911 census for example http://www.census.nationalarchives.ie/pages/1911/, there was a ‘Read or Write’ column that could be seen as intrusive but maybe it was just a ‘sign o the times’ (RIP Prince ).

What stands out is the final column on the page under a heading of ‘If Deaf and Dumb; Dumb only; Blind; Imbecile; idiot or Lunatic’. Even taking into account the times these people were living in and that the DSM classification system was not in operation, these seem insensitive at best and ignorant at worst.

How was a family to determine who was an imbecile or an idiot? In fact how would you do that now? In my days of a student teacher I remember doing a lesson plan on Census reports for a 2nd year class. Although it was a little above their heads, I felt the kids would get something out of it. In walked my inspector and now the content was all important, as was their understanding of it and my teaching methods. After explaining how politically incorrect the section was I asked was there any questions. Big mistake.

“Sur, what’s the difference between an Imbecile, an idiot and a lunatic?”

I could feel a bead of sweat run down my back. A valid question but one that I had no answer to. I did what every good teacher does when they don’t know the answer. I asked the class what they thought. Then salvation came.

“Sur, an idiot is like a fella who acts the eejit all the time, and an imbecile does the same but, like doesn’t know he’s doing it!

The official classification was a little different in the early 1900’s. Idiocy referred to someone with a congenital mental impairment. An imbecile was someone who had lost their mental faculties- someone suffering from Dementia would be classified this way. A lunatic was someone of average intelligence suffering from a mental illness.

It’s not that difficult therefore to explain why we in Ireland have such a difficult relationship with mental health. The stigma associated with mental illnesses in the early part of this century has left an indelible mark on our society. Ok things have improved but many still suffer in silence and find it hard to look for help. The World Health Organisation have stated that by 2020 Mental health illnesses will be the number 1 health issue in the world and yet there is still a lot of ignorance about mental health issues. 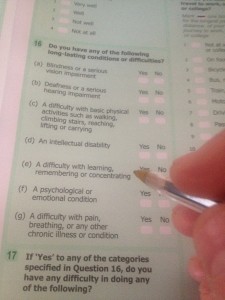 The 2016 census has an equivalent section which has a box for ‘a psychological or emotional condition’. If we take it that the government needs to know this information to prepare for the future, we could ask the question ‘will you tick the box?’ if you experience depression or anxiety or any chronic mental illnesses. Already 14 million euro earmarked for mental health for this year has been transferred to other causes. Not a great start so we need to keep it on the agenda. Forget the stigma of the past. Accept that we all struggle at times in our life and that the % of people who will have some type of mental illness is rising all the time. Acceptance will not only mean that our society will become a more tolerant and caring place to live but it will also mean that the necessary facilities can be put in place to help those who struggle on a daily basis.

Tick the box and let them know